Members of the WBSVRC turned up en-masse for the first practice session of the season and our warm up for the National Schools Veterans competition at Bisley (NRA Headquarters ) in three weeks time. Weapons were stripped and cleaned and dusted off and made serviceable, before moving up to the Crowl-Langley range for practice to begin. Wakefield Morys-Carter, whose father taught Physics at WBS in 80's/90's brought along his 'Blunderbus' -officially a Brown Bess flintlock musket - and some black powder charges to demonstrate for us. Smoke may have been seen rising over the range ? Eventually we moved down to the Albert Beer range to compete against the School Eight for the Derek Holt Memorial trophy. 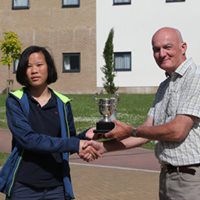 The school were in trouble straight away because only six of their Eight turned up. We decided to be magnanimous, having not lost a match to the School in living memory, and said that their two best shots should shoot twice for their team, to complete their Eight. Possibly not my best executive decision ever ! We started shooting with Dave Pote and Mike Baggs going down against Tobin Smith and Alice Poole. Their combined score of 315 put the OWBA sixty points in front of the Schools' 244. Simon Holt and Wakefield Morys-Carter went down next for the OWBA and Dan Doyle and Henry Mcarthy were on the School mat. A combined tally of 231 points extended our lead by another fifty points over the schools' 182. Being 110 points in front at the halfway stage allowed us to relax and presume we would win again, as usual .....!

Tom Butt and John Curtis went next for the OWBA, and Amy Brown, the school captain, played her trump card, and took up position on the mat with Jono Williams, who shoots competitively for the local scouts Target Sprint team. Tom and John combined a reasonable score of 216. Amy and Jono racked up a formidable joint total of 319. The OWBA lead of 110 was suddenly reduced to 10. Not that anyone was aware of the unfolding drama at this stage because the running totals don't get added up until afterwards. Lindsey Denyer and Keith Sutherland formed the last detail for the OWBA with no idea we were so closely matched. Amy and Jono prepared to shoot again and were totally engrossed with beating each other. Lindsey and Keith obviously did their best with a combined score of 212. Amy and Jono together put another 281 points on the School scorecard !! 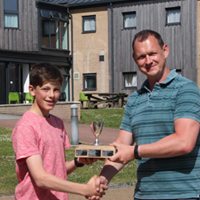 After tidying up we made our way over to the JESC club room for tea and results/prize giving. After double checking the adding up with Amy I was able to announce that WBS had won the competition and the Derek Holt memorial trophy with a final score of 1,026/1600. Simon Holt presented the cup to Amy Brown.

The OWBA limped home in second place with a very average 974. The highest individual score of the day went to Dave Pote on the OWBA team with a very good 186/200. The Ludlow/Gillies challenge cup for the highest score on the School team went to Jono Williams with an excellent debut score of 169/200.

Congratulations to Major David Price and his shooting squad and many thanks for organising the whole competition.

Thank you also to all VRC and OWBA members for turning up and taking part.