Our thanks to Berwick Coates for his insights on VE Day Street Party
One of the troubles with remembering VE-Day is that not many people do.  How can they?  They were not alive then.  Most of the pieces that are going to be written about it will be composed by people who weren`t there.  However smart they may be, however experienced, however professional, however knowledgeable, they were not there.  How can they possibly know?

True, they can read the documents, see the films; they can assemble a history; they can produce a survey; they can gain a knowledge of facts and conditions that many eye-witnesses did not have; they can be wise after the event.  But they will not know what it felt like.

There is ample evidence that people who were there have found it difficult, sometimes impossible, to write or talk about it; the release of emotions as they try is so great that they have to give up.  People who sat at their desk years later to create an account have found themselves in tears even as they write.

I have seen interviews conducted fifty years after D-Day, in 1994.  Men and women who perhaps had not talked about it for decades, if at all, were suddenly overwhelmed, and  broke down. All we can do – we, the mere witnesses to this enveloping storm of feeling – is to sit in awe at the evidence of what is, I think unarguably, the greatest single drama of the whole century – the Second World War.

Remembering the War – D-Day, VE-Day, anything – for those who were there – is not difficult.  The problem for so many must be trying to forget.  Robert Kee, a writer and historian who served, wrote, ‘There is a tremendous boundary between those who lived through the war and those who [didn`t].  If you actually lived through the war, it never leaves you.  Never.’

I was at primary school during the War.  Nowhere near the fighting, obviously. Yet, when I watched the marches and parades on the 50th  anniversary of D-Day, I was sitting alone in front of the TV, and tears were streaming down my cheeks.  Robert Kee is right:  the War marks you.

Fat books have been written – and no doubt will many more – about the things people did when the war ended.  Many of them could never have been thought up by a mere novelist. The variety is staggering.

During the evening of VE-Day, after hours of celebration, crowds naturally descended on London. Spivs (look it up) were out on the streets of the West End selling cut-price  contraceptives, confident that before the night was out, they would have been put to good use in nearby Green Park.

One boy coming home from school to share the celebration with his parents found his father in shock; a telegram had just arrived to say that his brother had been killed in action.

At half-past three, in the House of Commons, a stir was observed behind the Speaker`s chair, and Winston Churchill came in.  As an eye-witness said, ‘The House rose as a man, and yelled and yelled and waved their Order Papers.  He responded, not with a bow exactly, but with an odd shy jerk of the head and with a wide grin.’

One American soldier, Charles Feinstein, was not celebrating.  He had survived the landings in Normandy on D-Day – the slaughter on Omaha Beach. While he was on watch outside his tank in Belgium, a German shell dropped into it, cremating his three companions inside. Now, with the war over in Europe, he fully expected to be sent to the Pacific, to land on yet more beaches and be shot at by suicidal Japanese.  And only four weeks before, he had entered the concentration camp at Nordhausen.  He said, ‘I saw all the live bodies and all the dead bodies. That`s when I became a Jew.’

The newsreels of those camps were shown in cinemas all over England.  In between the ‘B’ film and the ‘A’ film.  After 75 years we all know about concentration camps and gas chambers.  In 1945 we didn`t.  It was complete news.  Imagine the shock.  I know.  I saw them.
A seventeen-year-old girl called Dorothy, who had escaped when the Channel Islands were overrun by the Germans, was living with relations in Surrey.  The radio announced that the Channel Islands were going to be liberated the next day.  Everyone was crying.  Then her mother blew her nose and said, ‘Thank God for that.  Let`s have a cup of tea.’

Now we have Corona.  It is big.  It is worrying.  It is threatening.  It will cause vast grief, discomfort, and disorganisation.  Is it like the War?  I think you might have a job to prove that.

But, for those who remember the War, it certainly makes you think of it. 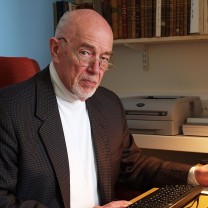 We were recently asked by David Cummins (40-50G) if any of his cohort recalled what occured at WBS on VE Day 1945. Our thanks to James Leslau for his late father's wonderful diary … More... We are currently setting up a free business directory on the OWBA website to celebrate, support and help promote our Wes… More... Looking for new reading material? WBS is blessed with having produced many authors, from RF Delderfield to the much mis… More...