Reflections of a Journey to the Western Front A View From Vimy Ridge
In Flanders fields the poppies blow
Between the crosses, row on row,
That mark our place; and in the sky
The larks, still bravely singing, fly
Scarce heard amid the guns below.

At 11 o’clock on the morning of the 11th of November 1918 the guns of the Western Front fell silent after four long, bitter and costly years of conflict. An Armistice was sought by the Central Powers, a ceasefire agreed by the Combatants and the First World War came to a sudden and overwhelmingly quiet end.

The Great War was arguably the first great mechanised European war that had drawn in so many Nations from across the Globe. It was said to be the war that changed the face of the United Kingdom, altered the social structure of the nation and the politics of the country for ever. It was a war that in some way touched every household in the land. The scale of sacrifice and suffering was enormous. For example, on 1st July 1916, in the course of the first morning of the Battle of the Somme, the British Army suffered 57,470
casualties. 19,240 men died before lunchtime. During four years of largely static and savage trench warfare against Germany and their allies, the UK and Commonwealth lost 908,371 men and women and a further 2,090,212 were wounded.
Nearly 200,000 were taken prisoner or missing. For obvious reasons, it became known as “the war to end all wars”.

During the period 1914-1918, many of West Buckland School’s finest young men answered the Nation’s call to Arms and signed up to fight. After a surprisingly short period of training those that had joined the Army were dispatched to the front. Some ended up on the Western front, others fought in Mesopotamia, Egypt and Arabia. Some others fought at Sea and some in the Air. 59 of them fell. 59 of them never came back.

Chris Allin who is a History teacher at the school ran a project as part of the study into the Centenary of WW1. Part of his focus was to research the background and history of those young men who answered the call but didn’t come back and whose names are listed on the memorial to the fallen in West Buckland School’s Memorial Hall. Their stories were published by Chris in a publication entitled
“West Buckland School’s Fallen Soldiers of World War One”. 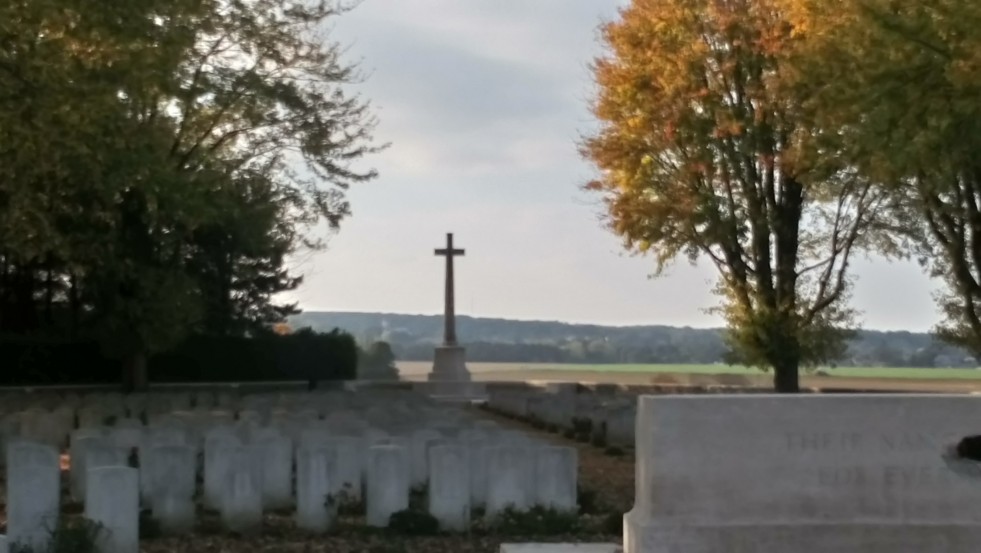 Chris followed up the publication of his book with a series of lectures and presentations to the school community. It was after one of these presentations that an idea was mooted that perhaps the OWBA could organise a visit to Belgium in order to pay our respects to the fallen and respectfully celebrate the silence of the guns one hundred years ago. I thought the idea was fantastic and so did the OWBA Committee who voted to support the venture.

Chris managed to rope in Andy Keech, a WBS parent and accomplished amateur WW1 historian and together they managed to put together an interesting four day itinerary that was designed to visit as many of the known graves of the WBS “old boys”, monuments listing those with no known graves and take in some of the better known battlefield destinations in Flanders Field.

They also volunteered to act as guides. We determined that we would pay our respects to those without known graves by laying wreaths at the sites where they are listed and for those with known graves we would plant an Royal British Legion cross with a written message. At each site we would say a prayer and a different member of the party would recite the lines of Laurence Binyon’s famous and moving poem: “They shall grow not old”.

Monica Carter-Burns volunteered to be the tour custodian and with the recces done, the coach booked and programme set we left for Belgium, our base in Arras and the Ypres salient. 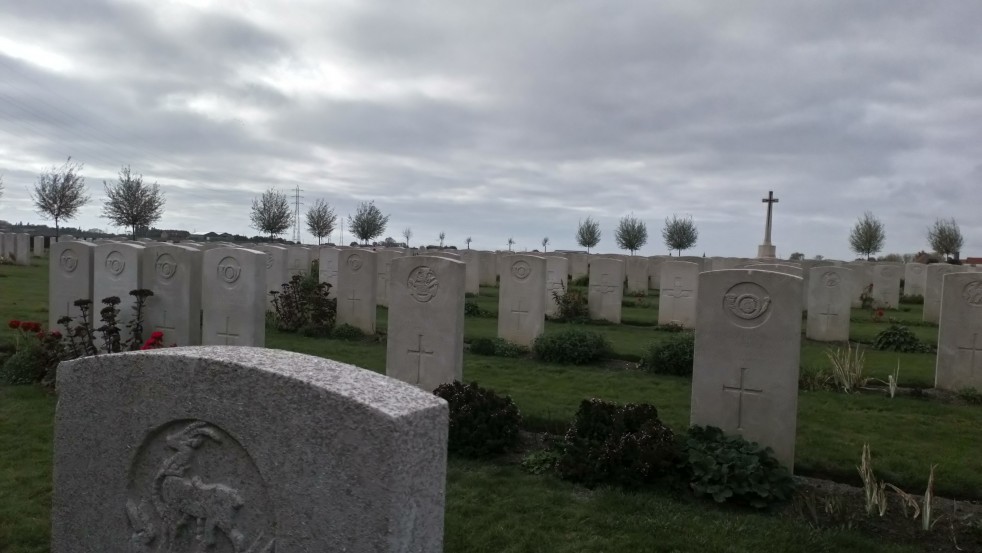 The British deployed its Army under Field Marshall French into Northern France in August 1914 and fought alongside the French in order to stop a major German offensive (the Schleiffen Plan) through Luxembourg and neutral Belgium with aim of seizing control of the French Channel ports. The Germans were halted and retreated into Belgium occupying a series of higher ground defensive positions that were to
become the shoulders of the Ypres salient. A place in which British and Commonwealth soldiers would spend the best part of three and a half years fighting for a breakthrough that would not come and would burn the names of these awful battles of attrition into the National consciousness.

Many of the party had interesting tales to tell of relatives who had fought during the long campaign. John Avens father had managed to fight through much of the war with the Westminster Rifles but like so many survivors had never really spoken of his experiences. The visit helped John to give his father’s experiences a sense of place. John Witheridge revealed that three of his relatives had fallen in the savage battles – none had known graves. We were able to find the names on memorials to the fallen amongst The Devonshire Regt names at Tyne Cot, the Menin Gate and Thiepval. Neil Kingdon too managed to find the name of one of his great Uncles on the memorials we visited. It was nice to have Elma Rushe with us and is was a sobering thought to witness so many graves of the brave Irish soldiers who fought in many famous pre-partition British Army Regiments such as the Connacht Rangers, The Royal Dublin Fusiliers and Royal Irish Fusiliers before the formation of the Republic.

Our guides were knowledgeable and entertaining and between them talked about the battles that each soldier had been part of, covered the history of each individual, including some background about his school and military career and they managed to get us to the right places on time. We couldn’t get to every grave or memorial but we got to most and we planted our crosses, laid our wreathes and paid our respects. Luckily Alan and Kathy Kettle were with us, with an unending supply of prayer and good faith and on several occasions Alan’s reflective and thoughtful wordss added greatly to our acts of devotion.

Of course, everybody who attended will take away their own memories and reflections of the trip. For me, there were notable events and moments of reflection that will stick with me. Visits like these enable you to obtain a first-hand sense of the scale of things; the topography, the size and shape of the battlefield – in real terms the salient is very small. The scars on the landscape and the piles of unexploded ordnance on the edges of fields remind you of the ferocity of the fighting and the enormous destructive power of the guns. Our visits to some of the major war cemeteries and monuments leaves you with a mind-blowing sense of the scale of loss involved. For instance, we learnt that the Tyne Cot war cemetery contains the graves of 11,954 British and Kiwi servicemen of which 8,369 remain unidentified. At the end of the cemetery, a panelled memorial wall lists by Regiment  the names of soldiers from 16 Aug 1917 who have no known grave – there are a staggering 34,991 of them. Many of whom died at Passchendaele. There are many, many more names on the Menin Gate and at Thiepval. 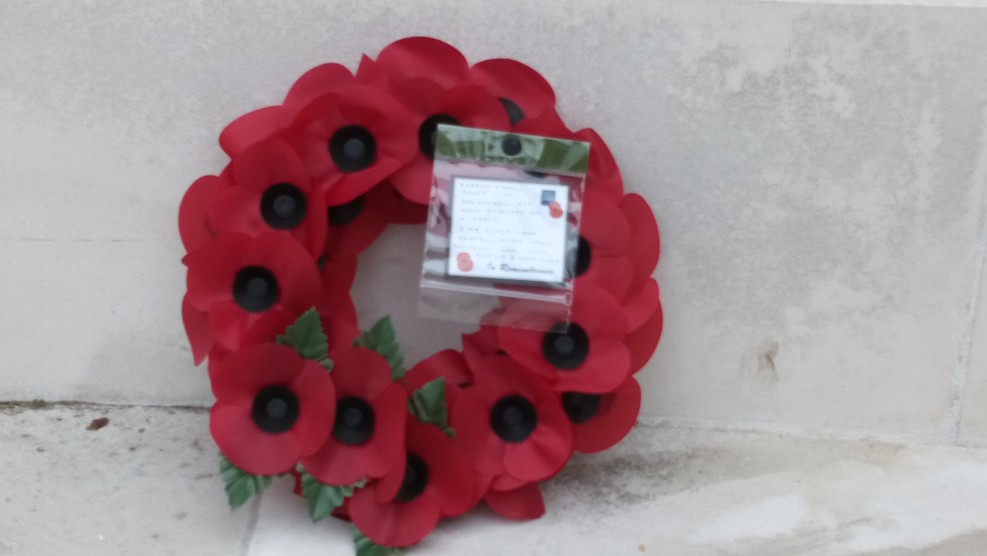 The realisation that people do not want to forget the sacrifices made one hundred years ago is both reassuring and warming. It is too easy to allow these messages to be drowned out by other day to day stuff. Everywhere you go there are school children of all nationalities and others visiting, learning and wrestling with the deeper moral and historical issues raised by the nature of the war.  David Cummins, Neil Kingdon and I were lucky enough to lay a wreath on behalf of the OWBA at the Last Post Ceremony at the Menin Gate. There were packed crowds and a palpable sense of respect and sadness. It brought a lump to the throat and we all needed to repair sharply to a nearby bar for a restorative gin!. However, a visit to the Devonshire Regiment Cemetery at Mametz did move me to tears. Here lie the bodies of 161 men of the 8th and 9th Battalions of the Devonshire Regiment, killed in minutes on the morning of the 01 July 1916. So many of the family names continue to serve down through the generations and I recognised many from my own service with the Devonshire and Dorset Regiment some 70 years later.

Our visit to Belgium would have meant all manner of different things to those present on the trip. I’m pleased that we managed to find time in our busy lives to remember those Old Boys who gave so much in the service of their Country. These things, these small acts matter. I am also pleased that although we were given much to mull over think about it did not stop us from enjoying the experience, being in charming company,
making new friends and enjoying the sights and sounds of Arras.

To Chris, Andy and Monica I would like to extend a special thanks on behalf of us all for all the time and effort put in to make the trip such a success.

Any volunteers for Normandy? A huge thank you to everyone who came along and supported this year's Jazz Night. The band and singers were simply amazing! More...