Adam Callaghan (80-87G) Shares his memories of how he earned his Flying Scholarship... Back in the 1980s, cadets in the CCF RAF section would regularly travel down in the school minibus to Exeter Airport on a Thursday afternoon. Three or four times every term, we would gain flying experience in Chipmunk trainers with No. 4 Air Experience Flight of the RAF. The old Chipmunks were tandem-seat aircraft with the pilot seated in the front and the cadet behind. Flights usually lasted 30-40 minutes, during which the pilot would first instruct the cadet in the fundamental principles of flying the aircraft. If showing sufficient confidence, the cadet would be given the opportunity to take the controls and fly the aircraft. At the end of the flight, the cadet could enjoy, or suffer, a series of aerobatic manoeuvres enacted by the pilot. Further flying experience with Chipmunks would take place during the annual summer camp at a RAF station. For the really lucky such as myself, one cadet would be nominated each summer to have a ride in the back seat of a ‘proper’ RAF aircraft, in my case a Jet Provost at RAF Linton-on-Ouse in 1986. 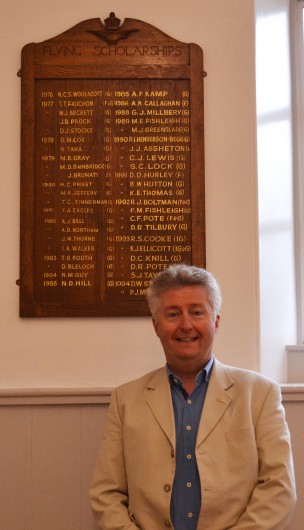 Once having caught the flying bug, with Sixth Form looming came the chance to apply for and gain an RAF Sixth Form Scholarship, which included a Flying Scholarship. To do so required travelling to the RAF Officer and Aircrew Selection Centre at the old RAF Battle of Britain station Biggin Hill. After five days of gruelling assessments and tests, I emerged successful and was detailed to report to Bournemouth Hurn Airport for six weeks of flying training in the summer holidays between the Lower and Upper Sixth years.

At Hurn, the course consisted of intensive flying tuition, interspersed with classroom lectures and examinations on engines, airframes, air navigation, meteorology, and air law, for seven days a week. Having completed 10 hours flying on the workhorse Cessna-152 aircraft, trainees flew their first solo flight, lasting around 15 minutes. As the course progressed, the amount of solo flying time increased until all of us were flying four hours solo every day by the end. While still flying with instructors, the latter would take the opportunity to ‘divebomb’ the Radio 1 Roadshow broadcasting live from Bournemouth Beach.

With 40 hours of flying under your belt, the final examination for the award of a private pilot’s licence would involve flying solo to land and take off at two unfamiliar airports. In my case, this involved taking off from Bournemouth, flying to Bristol Airport, landing and reporting to Air Traffic Control to pay the landing fees. No one tells a trainee pilot that the runway at Bristol slopes from both ends toward its peak in the middle. From one end in a small light aircraft, it is not even possible to see as far down the runway as is needed to take off, which is disconcerting to say the least. Obtaining clearance, I flew on to Exeter Airport, where the procedure was repeated, and then back to Bournemouth, a total journey of around three hours. With confirmation from Bournemouth, Bristol, and Exeter Air Traffic Controls that all take offs and landings were executed correctly and the flights completed in the specified time, I received my Private Pilot’s Licence.

The experience gained thanks to the RAF Flying Scholarship has lived, and will live, long in the memory. I will always be grateful to WBS for providing the enabling environment for me to learn to fly and gain my pilot’s licence, before even I had a driving licence.