The Association was saddened to hear that John Sellick (52-57B) has recently passed away. Our thoughts are with his family and friends at this sad time. On the rear panel there is a cartoon painted by Rowland Emett. Way back in 1957, a young 17-year-old John Sellick became the owner of this car, so he could learn to drive.

I believe it was purchased for £17 and 10 shillings, which was a lot of money then. The bodywork at the time was the normal boring factory dual grey scheme, so John decided to brighten it up and hand painted it in a bright yellow.

His uncle was the Frederick Rowland Emett, who was known to him as Uncle Frederick and Emett decided to paint one of his whimsical cartoons on the rear panel and named it 'Meppacrin'. The cartoon as seen in the pictures depicts a fun interpretation of an early chain driven car. This painting appears to be the only example on a vehicle by Emett. 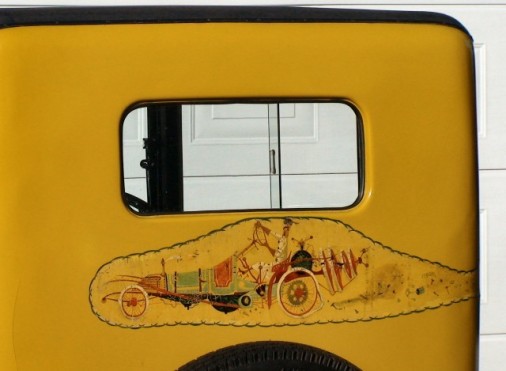 Here are a few lines on Frederick Rowland Emett OBE.

Emett was known as a cartoonist, illustrator and inventor, who earned international fame and a decent living from creating elegantly outlandish machines which served no useful purpose other than make people laugh, he was first and foremost a brilliant comic artist. He was a master of British eccentricity and Emett's central creation was the 'Far Tottering and Oyster Creek railway' set in the Battersea Gardens in London for the 1951 Festival of Britain.

It is believed this whimsical train carried more than two million passengers during its operational life. His work always involved this unique style whether in cartoons in the Punch magazine of the day or with many commissioned advertising projects. He was responsible for creating the eight elaborate inventions featured in the 1968 film 'Chitty Chitty Bang Bang' and the 'Nottingham Water Clock' in the Victoria Shopping Mall.

Two years before he died in November 1990, the most important exhibition of his career was staged at the Chris Beetles Gallery in London followed by another at the Air and Space Museum in Washington, USA. 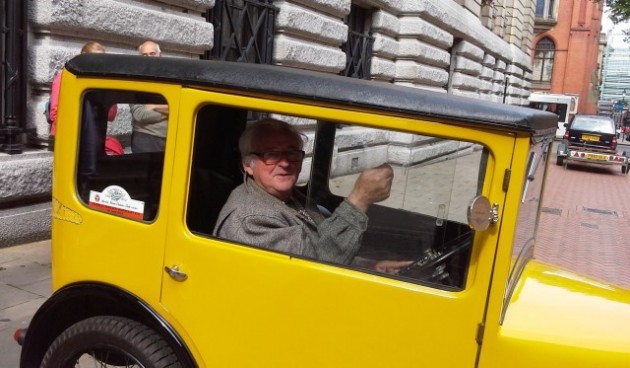 Running from May through to September 2014, the biggest ever exhibition of Emett's work was put on in Birmingham, organised by The Rowland Emett Society in partnership with the Birmingham Museum and Art Gallery and Millennium Point.

Our yellow Austin Seven was invited to take part on the day they unveiled a blue plaque for Rowland Emett on the 6th of September at the museum.

This involved Emett's daughter Claire with the Mayor of Birmingham to unveil the plaque and John Sellick who was reunited with this Austin Seven after 57 years when he first owned it. Over the years it has been restored, but has retained the Emett cartoon untouched bar the weather.

I purchased this Austin Seven for my wife Carla in September 2009 and we are keen to preserve this interesting and fun little car we refer to as 'Emett'.

This car was featured in an article in the Nov.2009 issue of 'The Automobile'.