His daughter Sarah, and school friend Tim, pay tribute to a great friend and father. My wonderful father, Tim James Anderson Gardener, was born on the 10th March 1952 and died peacefully on the 7th October 2019 with his family around him.

He attended West Buckland School from 1962-70 and was Head Boy in 1969. Since my parents were yet to meet, I’ve asked his close school friend Tim Hook to share some memories from their time at West Buckland before I explore his successful post-school life.

Tim was a sixties kid, his era at West Buckland began when the Beatles came to fame and the country was in the grip of one of the severest winters on record. The school then was a small remote establishment, of which the description spartan and monastic would not have been wide of the mark! There were 250 boys, almost all boarders, a staff roll peppered with characters and an atmosphere immortalised in the novels of old boy Ronnie Delderfield. It was a hierarchical environment where academic achievement was acknowledged but the greatest respect was earned through sporting pursuits and, all the more so, if it involved hours of pounding over sodden turf in the icy Exmoor wind, with or without a rugby ball.

It was on this stage that the mild tempered Tim, with a sharp glint in his eye and a broad infectious smile, came to excel. His obvious academic ability meant that he was regularly top of his class despite being placed a year ahead of his age group. His quiet determination and endurance combined with his speedy pins brought honours on the field of sport. As a formidable competitor in gruelling cross country runs, an accomplished athlete in track and field events, and a regular member of rugby teams all the way up to the first XV, the respect and affection of his peers was assured.

It was in the year of Woodstock that Tim was appointed as Head Boy. Still expected to share an unheated dormitory with the rest of his Grenville housemates, convention afforded him one tiny room adjacent to the main quad and known as “the studies”. Here with the luxury of an old electric fire and a record player, cocooned away from the daily responsibilities of his position, Tim could immerse himself in self-reflection and the music of Leonard Cohen and Mikis Theodorakis. This was preferably savored in the dim glow of an illicit cigarette, the enjoyment of which otherwise had to be achieved in the school toilets! Such were the privileges of rank, along with the right to consume toast for breakfast and to deliver corporal punishment to the perpetrators of crimes. Consistent with his progressive style of leadership, this latter practice was abandoned throughout Tim’s time as Head Boy.

In his final year, now exactly 50 years ago, with lifelong friendships consolidated, he gained his place at Birmingham University. As a gifted sportsman and high achiever, it was the understated and self-effacing manner with which Tim regarded his successes in life that marked the calibre of the man, still bearing all the hallmarks of the consummate Buckland boy. 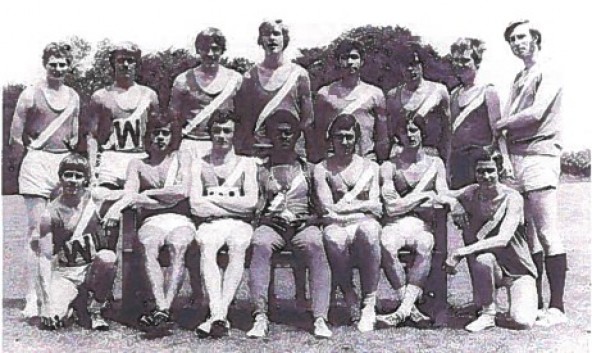 It was at Birmingham University, studying Maths, that he met and married my lovely Mum, Fiona in 1973. They both went on to become teachers. Many years later my Mum still teaches but his career was much shorter, three years to be precise. He’d become frustrated with students, and at the speed at which they’d learn. Surprising considering, he was well known in the later years of his career for his patience, understanding and mentoring.

It was at this time he accidentally fell into the job that would fit him like a glove and be his lifelong passion. Thinking he was going along to find out more about the industry, at Duncan C Fraser, he was inquisitive and interested in the man he was meeting. Little did he know he’d gone along to a job interview and sailed through it. He was offered a job on the spot and went on to pass his actuarial exams in two years (that were meant to take seven). This was to set him on the road to becoming one of the world’s most successful and influential Investment Consultants of his time.

Duncan C Fraser was bought by Mercer, where he spent the majority of his career. He was global co-leader of investment consulting from 1987, and then its sole leader from 1998 before becoming Mercer’s first global chief investment officer in 2008. He then switched to a role in asset management, spending six years at AXA Investment Managers, first as a global head of consultant relations and then as global head of institutional strategy. He went on to set up his own company, advising local authority and corporate pensions funds and in-house CIOs primarily on investment strategy and governance until the day he died.

Not only was he brilliant at his job, the people who worked for him adored him. In his own words, he could have progressed further in his career but wasn’t always good at the “politics” – he would argue for what was right; for his clients and his team, regardless of whether this was contrary to those more senior than him. Since he died, we’ve lost count of the people who’ve reached out to tell us of the impact he had on their lives, how he changed their industry, and that “they just don’t make them like him anymore”.

Work was a huge part of his life but so was his family. In an interview for a Pension’s magazine in the early nineties, he was asked what he would like to be remembered for, to which he replied, “to have been a great father” – and that’s exactly what he was. As a child he never missed a school event of mine. He was always there – for the countless hours of revising for exams, from GCSEs all the way through to a Master’s degree (he could turn his hand to anything) to the nights where he’d tell me tales of his schooldays to help me sleep. He was a pillar of strength, kindness and love that I always relied on.

Throughout his life, he was a keen runner and athlete, completing a couple of marathons. Sadly in 1999 he found he had a genetic heart condition that ended his athletic pursuits. His health progressively worsened, with his heart finally failing at the age of sixty-seven. He was made of strong stuff and never let on, even those closest to him, quite how ill he was. He was fiercely optimistic and showed incredible strength throughout it all.

I am immeasurably proud of my Dad, of his bravery and his kindness right until the very end. He was wonderful and I count myself very lucky for the time I had with him. As one wise person once said, “grief is the price we pay for love”.